Here is a bit more of Sydney...

We crossed a band of my bucket list and saw The Counting Crows. The BEST part was we got to see them perform in The Sydney Opera House. It was an amazing experience. The Main Hall has seats that are made so that the acoustics are the same regardless of the number of people in the seats. It is a small intimate venue and the sound was incredible. They even serve the drinks in glassware that you can carry into the hall with you. We loved everything about the night: the sound was great, our seats were amazing and the Counting Crows were epic. 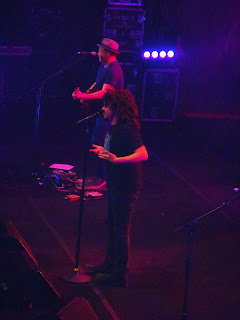 
*A great Setlist but you are probably all thinking what I did... where the heck is Mr Jones????* 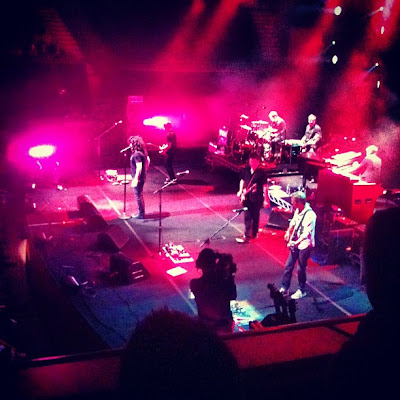 We also hit the Sydney Aquarium in Darling Harbour as well. It was AWESOME! Adam thinks it is the best aquarium he has ever been to. Some of our fav's include...
Adam's Favs:
1. Fish with Glowing Eyes: Their eyes glowed green in their black tanks.
2. Dugong: Related to Manatees.. very cool creatures.
3. Walk through SHARK tanks.

She's Fav's:
1. Fish with Glowing Eyes: Come on they were really cool!
2. Crab Tanks: We saw a crab that was over 6ft wide and like 5ft tall. It was insane!!
3. Blue Penguins and the Walk through tanks as well. 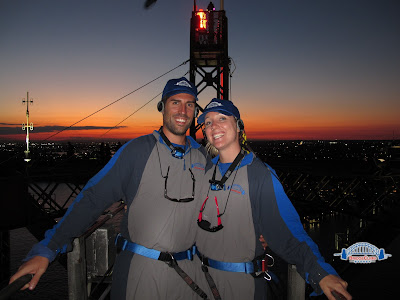 Adam's parents and sister and brother-in-law got us gift certificates to climb the Sydney Bridge for Christmas. We are so GLAD they go them for us:) When we arrived they got us all suited up in jumpsuits, fleeces, hats, hats, hankerchiefs, lights and headphones. We went through some practice ladders and ramps and were ready to go! 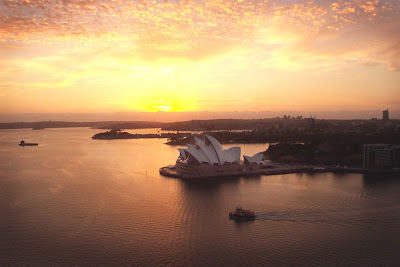 Our tour guide Billy was THE BEST! He was originally from the UK, and works in television and movies now. He is a guide part time and had heaps of great stories and facts! They helped keep me from being too scared :) 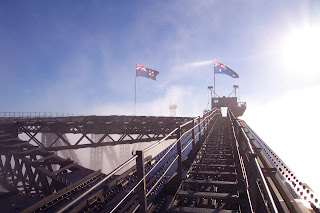 We walked through the Bridge Pylon. An interesting concrete creation with wood, rocks etc in the walls; they used whatever they had to construct it. There even used to be a boot in the wall that was cut perfectly in half but some fool pulled it out (and was fined hugely for defacing the pylon).  We patted the granite, wished for luck and headed out to 4 of the scariest ladders I have ever seen. The 4th one was especially scary because you are straight above the road, you cannot see anything around you but the cars underneath (gulp). 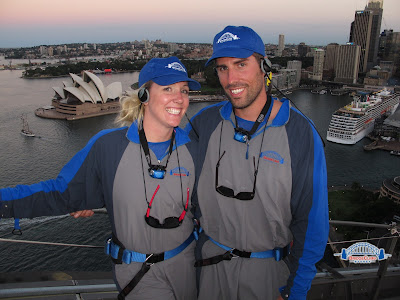 However, after you get off the ladders, you forget about being scared, about the heights and you are just amazed. We had a twilight climb so we got to watch the sunset (it only takes like 90 seconds from the top of the horizon to being gone), and walk down in the last of the light of day and beginning of night. 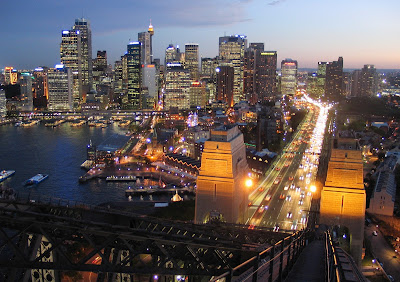 Our guide told us lots of interesting stories about the Bridge in terms of its history, and stories of celebs on the Bridge Walk as well. 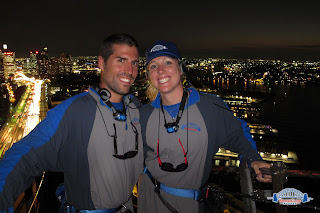 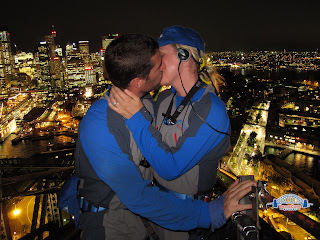 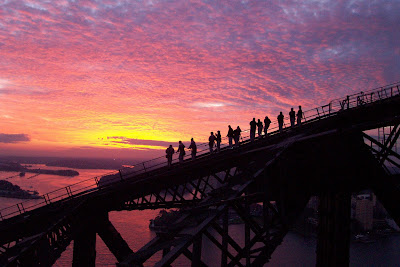 After our climb, we hit Lord Nelson's Hotel in The Rocks. It is Sydney's first hotel and also has a great microbrewery. A great end to a great day.

The next day...
With your Sydney Bridge Climb you also get a free pass to the Pylon on the Bridge to walk up and get an amazing view of Sydney Harbour while also learning more about the history of the Bridge. If you can't do the Bridge Climb, this is a must do!! We wandered around the Rocks, and took some pictures of places we hadn't seen before and took a bunch more shots up on the Pylon :) 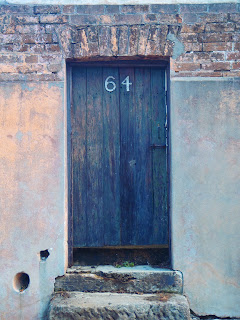 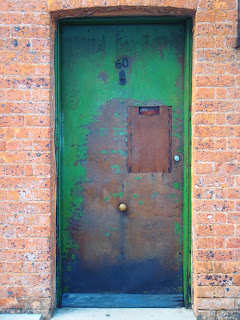 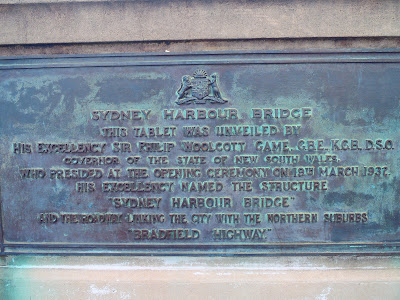 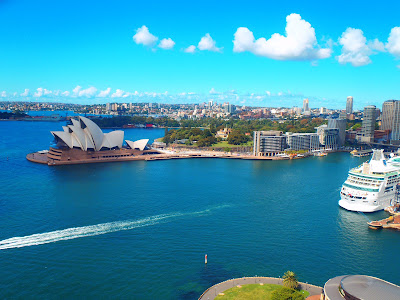 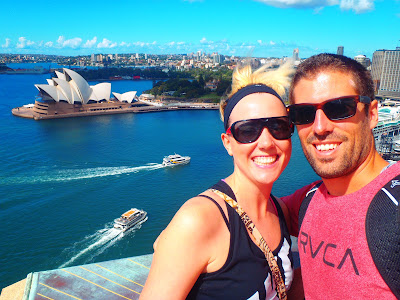 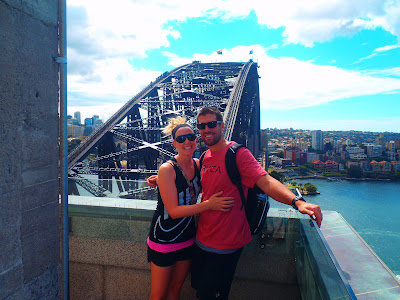 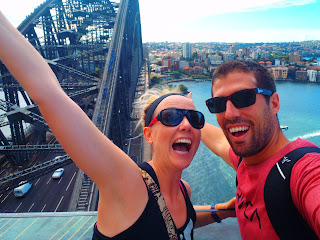 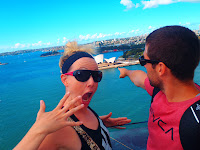 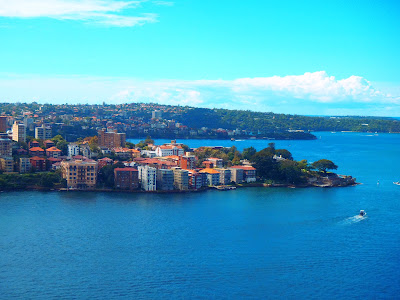 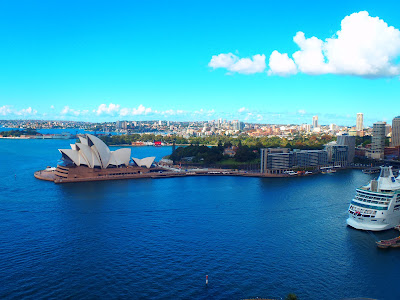 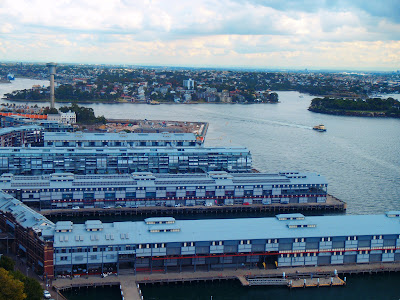 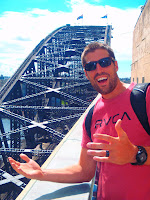 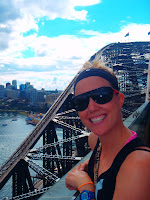 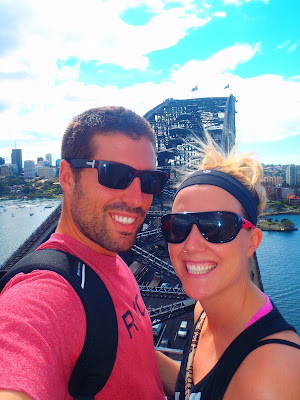 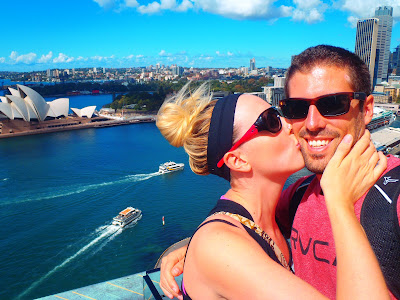 To finish off a beautiful sunny day we took the ferry to Manly and laid on the beach until the sunset. 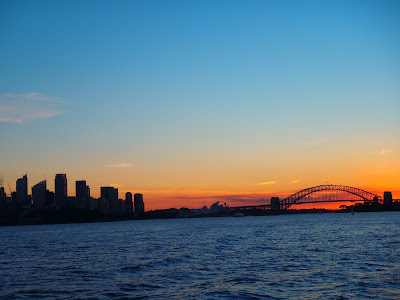 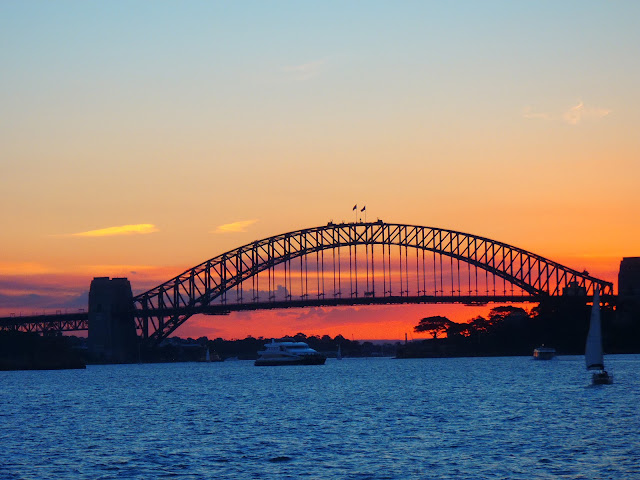 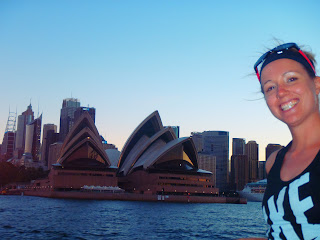